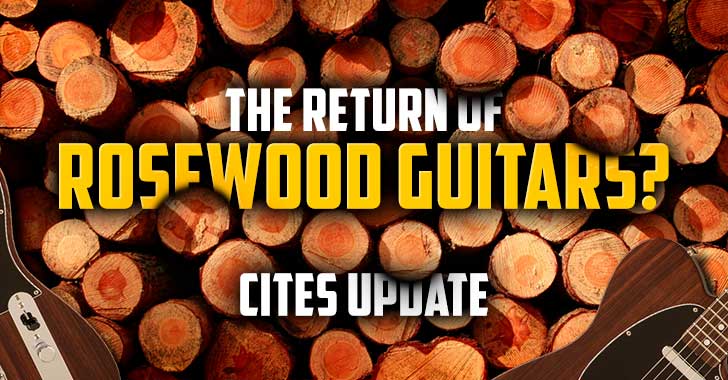 Back in 2017 the musical instrument industry was rocked when massive restrictions were imposed on the trade of rosewood by the Convention on International Trade in Endangered Species of Wild Fauna and Flora (CITES). This resulted in the transportation of instruments worldwide becoming much more time consuming and expensive due to the number of permits required.

You can read more about the reasons behind the exemptions and the restrictions themselves in our previous article here.

As a result of these new laws a number of guitar manufacturers such as Taylor and Martin stopped using rosewood in many of their instruments due to the added hassle and cost involved. Fender is another brand that changed up a lot of their range, using rosewood alternatives such as Pau Ferro and Indian Laurel on fretboards.

But after years of campaigning rosewood is now able to make a triumphant return – at least in musical instruments!

Restrictions will also still be imposed on the trade of raw rosewood.

Representatives from Martin and Taylor have always said that they support the regulations imposed, but have stressed that the musical instrument industry was never the problem. Indeed, if you look back to our previous article you’ll notice that the primary cause of the problems was said to be associated with the demand for luxury Chinese furniture. The volume of rosewood used in the manufacture of music instruments is minuscule by comparison.

Will Rosewood Make a Return?

So now that the restrictions have been lifted, the question is whether or not the wood will make a grand return as the fingerboard of choice on the more affordable ranges that have since adopted alternatives. Only time will tell, but as someone who works in the musical instrument industry I certainly haven’t noticed any major customer complaints related to the use of substitutes. However, to once again have the option is great news!

I’ve certainly imported my fair share of guitars from around the world over the years – mainly because as a lefty, sometimes you have to! – so this is especially good news for us southpaw players.