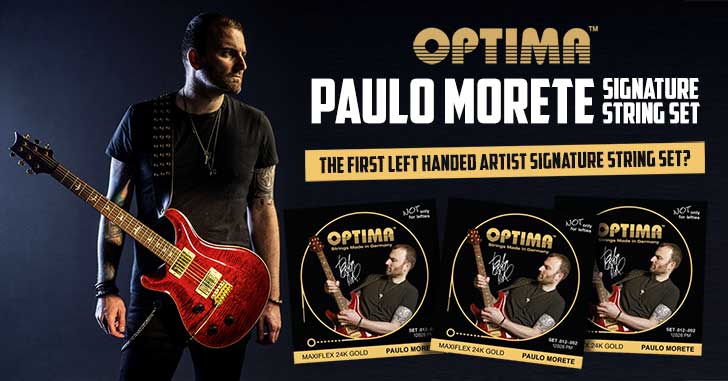 Paulo reckons he may be the first left handed guitarist to have a signature set of strings! As well as Optima, Paulo is also endorsed by PRS Guitars, DV Mark amps, Morley pedals and Lundgren pickups to name a few.

Edit: A reader has pointed out that Skindred’s Mikey Demus already has a signature string set of Rotosounds. Sorry Paulo!

The strings are essentially a heavier gauge addition to the Optima Maxiflex 24k Gold range. This premium series of strings are hand-made in Germany using the best materials available and are the result of over 90 years of research and development by Optima. A big selling point of these strings is that they are coated with real 24 carat gold, making them tarnish and corrosion resistant. As a result Optima claims that they will last 3 times longer than most other strings, and they are also perfect for players who may have a nickel allergy.

The Paulo Morete set are gauge .012-.052, making them ideal for heavier music where a lot of down-tuning is the norm. He tells us that the new strings provide him with the reliability, sound character, and resilience that he needs as a guitarist.

Paulo becomes one of a very select number of artists to have their own signature set from Optima, joining the likes of Brian May, Frank Zappa and Randy Bachman. Quite an achievement!

As you can see from the graphics above, the tag-line for this set is ‘Not only for lefties!‘. If the strings are your style, why not pick up a pack and support a fellow lefty artist!