Dava picks is a USA based manufacturer of guitar picks which was founded in 1996 by owner Dave Storey.  Dave was kind enough to send over a sample pack of his full range of picks and I’ve been putting them through their paces over the past couple of weeks.

What makes these Dava picks unique to most others is their use of an innovative flexible center section, which allows the player to vary the degree of flex in the pick.  See the image below for an example of this feature…

You may just be able to notice the three separate ridges in the middle of the pick – Dava calls this their ‘tractor grip’ design.  Hold the pick at the front ridge and it will act like a fairly thick pick with very little flex at all.  However, move your grip back slightly and you release the center section, enabling the pick to act more like a much thinner, bendy plectrum.  In theory this is a great idea as it allows you to use a single pick in place of several – but in practice is it as good as it sounds?  Let’s see… 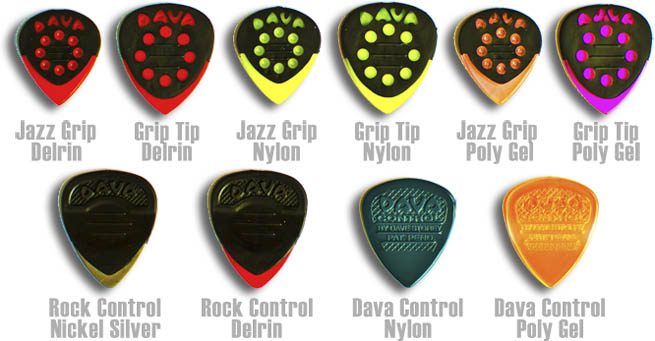 This was the original design from Dava, introduced in 1996 and certainly the most traditional shape of the range.  I found that these were particularly good for acoustic playing as they have the largest tip and really allow you to dig in.  One for the traditionalists.

These ones are massive!  They’ve got to be the longest picks I’ve ever tried.  The rear of the pick is comprised of a super flexible plastic grip, with the actual picking tip being a small insert of varying materials.  Because of their size these were my least favorite of the lot, but that’s purely due to being so accustomed to playing with tiny Jazz picks.  The nature of the design really helps to refine your picking technique, as if you strike the string too far back it will catch on the ridge between the grip and tip causing a subtle percussive sound.

The silver nickel tipped model is fairly unique in that you get the distinctive sound of a metal pick coupled with the flexibility of a normal thinner pick, very cool!  I found that on acoustic guitar in particular the metal tip really grips the strings and creates a beautiful percussive tone.

The design of the Grip Tip and Jazz Grip models is slightly different to the others in that they don’t employ a thinner center section in order to achieve their flexibility.  Instead nearly the entire grip section of the pick is made of rubber in order to achieve the same effect.  I found that these were the most supple of the lot as the rubber has plenty of give.

Besides being ultra bendy, another advantage of the rubber material is its supreme grip!  These are essentially a larger version of the Jazz Grip model with the same sharp tip – go for these if you find Jazz picks a little too small. Personally I couldn’t tell much of a difference between the three tip materials, so pick whichever color strikes you the most.

Being predominantly a Jazz III player myself it was only natural that these ones would be my choice of the range.  Being the smallest of the lot there is obviously a lot less flex in this design, but you can still notice it whilst playing.  As Jazz III style picks are usually rock solid these do have a rather unique feel to them and definitely bring that little bit extra to the table.

Again I couldn’t tell much of a difference between the different materials.  All are beautifully smooth over the strings and equally hard wearing, so choose based on your color preference really.

These have quickly become some of my main ‘go-to’ picks.  I was particularly impressed with the grippy rubber design on the Jazz Grips and Grip Tips and will absolutely be ordering a supply of these.  Hell, most of the time I choose these over my other picks just because they look so damn cool! ;)

Although not as pronounced on the smaller Jazz Grip picks, the flexible design is an excellent feature and really allows you to alter your tone and attack through just a very small change of grip.  If you had to choose just one to try out, go for the Grip Tip to really see the flexible center section in action – this pick can go from what feels like a 0.25mm to a ~1.5mm in the blink of an eye.  If you’re looking for a versatile new pick to try out you’d be foolish to overlook these, highly recommended!