Today’s post is a guest review of the Thunderbass bass guitar from Australia’s Gaskell Guitars.  The review has kindly been written by forum regular Mike, who you will find posting under the username mcarp555 – look him up if you have any questions about the guitar!

The Thunderbass is Gaskell’s version of the Gibson Thunderbird, which Gibson only grudgingly offered up left-handed last year for the first time since this model was introduced in 1963. Currently, the Thunderbass would seem to be the only commercially available T-bass for left-handers (Yes, I know left-handed Tokai T-basses exist, but they’re either out of production or were only assembled under dubious circumstances; the Epiphone version is also no longer being made left-handed). While Gibson has changed the specs on the righty version many times over the past half-century, Gaskell has recreated it in probably its most popular form.

As far as the basic specs, it’s a 34″ scale with a rosewood 20-fret set neck, made out of Toona Mahogany. It has two Belcat BJ-73 pickups with separate volume pots, and an overall tone control.

My very first impression of this bass, when picking up the shipping carton, was how light it was for its size, due no doubt to being constructed of Toona Mahogany, which is lighter than “Traditional” Mahogany (fast becoming scarce because of over-harvesting world-wide). Because of CITES regulations, guitar manufacturers are turning to other types of Mahogany. Since I had ordered the bass without a case or gig bag, it was shipped in Styrofoam, which seemed to have worked very well. Although I was surprised that there was not much in the way of anything to secure the instrument within the packing. I don’t know how loose it may have been in the container, but it certainly sustained no damage, which is the important thing, considering it came from Australia to the United Kingdom in a week’s time.

Once I had unpacked the bass, inspected it thoroughly and cleaned off the loose foam, I strapped it on and plugged it in. T-basses are well-known to have neck dive issues, mainly because the top strap pin is set too far back for the instrument’s center of gravity. The bottom body bout extends so far forward underneath the neck that it offsets the pivot point created by the strap location. When I ordered this bass, I requested that the pin be relocated to the neck heel instead (like an SG). This moves the anchor point far enough forward that neck dive does not appear to be a problem with this bass.

I don’t know what brand of tuners are used, but they feel very smooth, and hold well, even with new strings. Likewise the bridge uses a three-point system to attach to the body and seems to be very solid. The Volume and Tone pots feel clean, with no crackle (although surprisingly, the three knobs used do not match each other). The jack plug connection is snug and seems to pass a signal with no issues. The sunburst is vibrant and I haven’t found any areas where the finish appears less than perfect. The pictures really don’t do it justice (other color options are available from the Gaskell website).

The back of the neck and headstock are solid black, which I find a bit boring compared to seeing a nice woodgrain, but it has no effect on playability. Neck width is more like a P-bass than a J (1 5/8″ at the nut, two inches at the 20th fret); and its not a slim profile, but not a baseball bat either (2 3/4″ around the back at the 1st fret). It has a comfortable feel when I grab it. As mentioned earlier, it has a set neck, but certainly looks like a through neck, since I could see no obvious join. The fretboard is not bound. One thing I discovered was that if you run your fingertips along the edges of the neck, you can feel the ends of a few of the frets sticking out like burrs. It’s an odd contrast with the overall polished look and feel of the rest of the bass. So far it’s hasn’t had an effect on my playing. Also the truss rod cover (standard Gibson bell shape) looks scuffed up, like it was used. Unusual for a new bass, especially since the TRC is protected to a large degree by the strings themselves. Like the knobs, easy to replace, but another small detail that seems to have been overlooked (I have since replaced the knobs).

Strings are light gauge rounds, and the bass was fully set up at the factory. The action is quite low, and maybe a bit too low for my heavy-ish playing style. I can easily get some rattle and buzz if I play too hard. There is a bit of relief in the neck, but it’s still pretty straight overall.

The bass plays very well. It’s comfortable, and I don’t feel like I have to fight it to accomplish anything. Because I have a middle-age spread (being a middle-aged guy), I found I needed to raise it up slightly on my body by adjusting the strap. Otherwise it would tend to lay on me at more of a downward angle than I would like. Moving it up just a tiny amount allowed it to settle back to a more vertical position. Access to the last three frets is very difficult because the cutaway isn’t deep enough. However, this is known to be an inherent design fault with T-bass styles in general. So I would tend to blame Gibson more for this than Gaskell.

Electronics seem quiet, no problems with hum or buzz; Because it has brand-new strings, they have a tinny sound that I personally don’t care for. Once I’ve broken them in over a period of weeks (or more), I’ll get a better idea of how the bass actually sounds. With two pups, you can probably get a varied tonal range similar to a Jazz bass. I don’t have a set of SVTs to run it through, but with my small practice amp, the volume and tone seems comparable to my other basses.

Overall, I like the bass. I think the Thunderbass is a competent instrument for its price point, and the minor finishing issues noted (frets, knobs, TRC) do not seriously detract from the playability of the instrument. Will it replace my Fenders? In a word, no. Would a “real” Gibson or Epiphone replace them? Probably no again. But as a left-hander, I’m limited if I want to have the experience of playing a T-bass. The Thunderbass gives me that option, and I think it succeeds at doing so. It also allows me to thumb my nose at Gibson by supporting a company that caters exclusively to the left-hand market.

In the final analysis, I believe that Gaskell has faithfully recreated an iconic instrument that has always eluded left-handers. This includes the desirable features (such as the utter coolness of the design), and the less than desirable ones (you can’t just prop it up against an amp or a chair, for example). Except for a few tiny details, it would be difficult to find anything to dislike about the Thunderbass, unless you’re just not into T-basses in general. But if they appeal to you, Gaskell is the way to go. 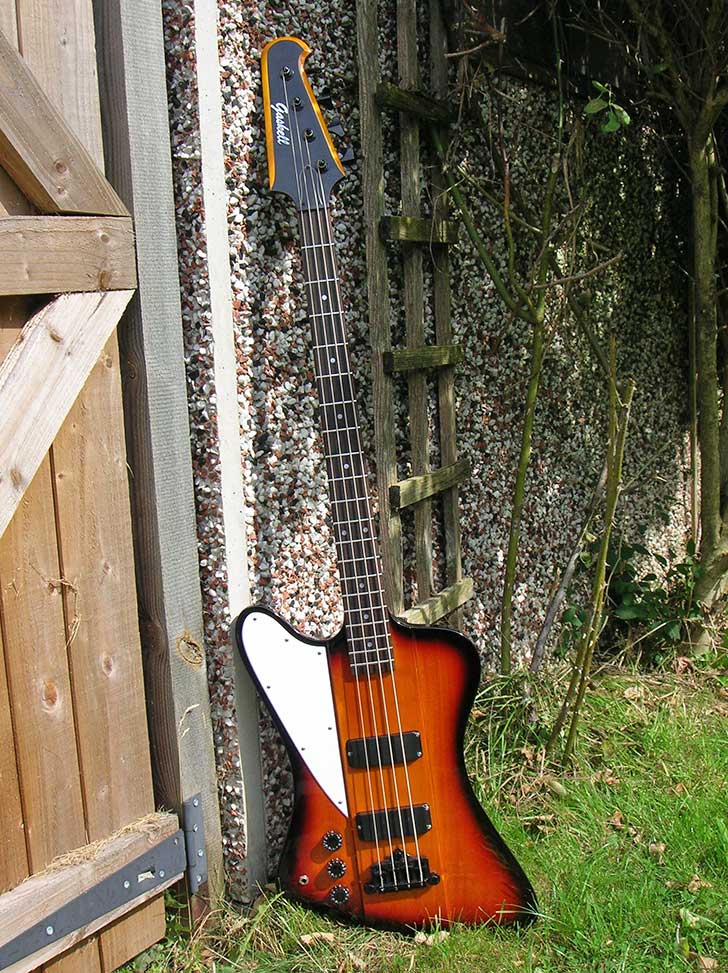