Fact – left handed guitar players rock! Don’t believe me? Well here are 9 of the best reasons why we’ve got it made! 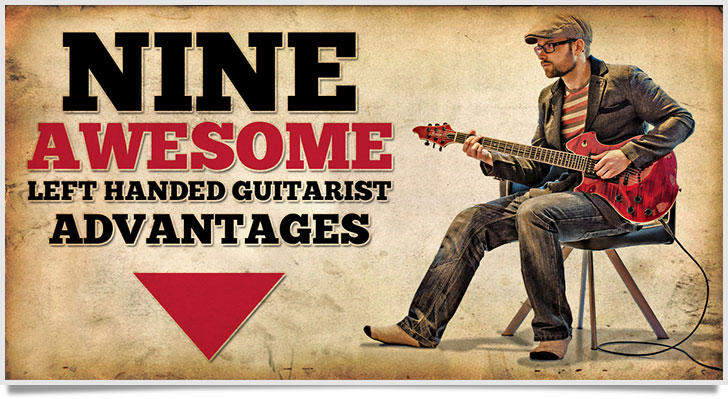 Consider this scenario.  You’re at band practice and your hyperactive drummer wants a shot of your brand-spanking-new guitar.  You agree and he proceeds to crank the amp to 11 and thrashes around the room like a demented, ecstasy fuelled hamster. In his over-excited state he manages to cream your headstock into the wall after carelessly becoming entangled in cables.  You exchange words and you leave the band with a broken axe and possibly a criminal record.

Now consider this scenario as a lefty. Once again, said drummer asks for a strum of your pride and joy.  “I do beg your pardon kind sir, but this instrument happens to be of the left handed persuasion, therefore rendering it useless to a right handed gentleman such as yourself”.  Potential disaster averted, band saved, jail-time avoided! Huzaaah!

Obviously that’s an extreme example, but being a lefty has certainly saved my less than respectful acquaintances from getting their dirty paws on my guitars over the years!

Let’s consider aesthetics for a second, as nothing is more pleasing to the eye than symmetry.  If your band is a standard vocals, drummer, bassist, guitarist setup and your guitarist/bassist is a left handed player, you have perfect stage symmetry. It just looks good!

Also ponder this.  Whilst on stage any interaction will look infinitely better between guitarists and bassists.  If two right handers decide to stand next to each other for an epic solo play-off they’re just playing on top of each other, generally in each other’s spaces.  With a right and left hander you can stand back-to-back out of each other’s way in full rock-god stance…awesome sauce!  Statistically speaking, a band with a left handed guitarist in it is 3% more likely to attract attention.

If you are lucky enough to snag a rare guitar and manage to keep it in mint condition, its value is only going to increase over time.  The same could be said for a right-hander but when you consider how much rarer left handed guitars are you can actually view your guitar as a nice investment.  For example look at the price of a vintage southpaw Fender Strat versus an equivalent righty.  Even though both guitars cost roughly the same when they were made, the left handed guitar will command a much higher price now.   What is a hobby for you now could be a nice little retirement fund for you further down the line when your fingers are too arthritic to make sense of a fretboard any longer.

If you opt to buy second-hand from an auction website such as eBay you are going to have far less competition when bidding.  In fact, chances are you may be the ONLY person bidding and that can result in an absolute steal of a deal.  A lot of the time a good left handed guitar can be had for significantly less than its righty equivalent.

Sitting opposite from your guitar tutor he/she will effectively ‘mirror’ you, making it very easy to copy what he/she is showing you.  Check out this article on Learning Guitar and the Mirror Effect.

Likewise if you are a lefty considering a career as a guitar teacher the same benefit is implied.

Depending on whom you ask, roughly seven to ten percent of the world’s population is left handed. And who knows how many of those play guitar the same way.  Also consider that many lefties will source their guitars online knowing that their local stores will most likely stock only a small number of southpaw models.  This should mean that any guitar you do find in store should have had very minimal play (if any at all) and should be in mint or near mint condition.  Just go take a peep at the righties – I would bet that a significant number of those guitars had some decent fret-wear, grime on the fretboard, possibly a small ding or two etc..

I have been at several parties where the host has had a guitar sitting in the corner, and when they realise that I can play they get the entire party cheering me on to play something mind-blowing for them.  This is something I genuinely hate with a passion, it’s akin to strolling up to a comedian in the street and asking them to tell you a joke.  Fortunately the good old “oh I can’t, i’m left handed ” excuse saves my drunken ass from having to indulge their drunken asses.


If you visit a guitar forum and ask the community if you should play lefty, the general reply will be something along the lines of  “oh, just play right handed so that your dominant hand will be able to perform the complex fretting easier “. However, a recent study for the National Institute of Sports and Physical Education in Paris found that left handed people have faster eye-hand coordination with their right hand than even right-handers do.

Don’t let the righties and the conformists sway you from rocking down southpaw street – if playing lefty feels natural to you then dive in.  Do not fall for the horror stories and just enjoy learning this fantastic instrument.  There are PLENTY of excellent lefty guitars available and they are made easily available via the internet, usually for more or less the same price as their righty counterparts. Look at this – it would take you all day to trawl through that! And that’s just one site… This is 2020 not 1975 and I gotta tell you, being a southpaw player is such a non-issue now. Don’t suppress your left handed roots guys ‘n gals!

New to guitar?  You have to check out our Newbie Guide, an 8-part series which explains everything you need to know to get started with guitar or bass! Includes gear recommendations for beginner players.