The Major Scale is one of the most commonly used scales in Western music. Here at LeftyFretz we know that some of you do struggle with regular diagrams and lessons which are aimed at right handed players, so we’ve put together a lesson which shows the major scale for left handed guitar players.

We won’t delve into musical theory in this article as there are a million and one other websites out there which will thoroughly explain this to you if interested. The aim of this lesson is to let you dive straight into using the major scale and start having fun with it right away.

Rather than learning the major scale over the entire guitar neck as one huge pattern, it is much easier to split it up into smaller, bite-sized chunks.  Take a look at the diagrams below and you’ll see that I’ve split the major scale up into five different patterns.  Try and master each one individually before moving on to the next.  The blue notes are important as these represent the root notes and indicate which key you are playing in. When playing each pattern, keep coming back to these blue notes in order to sound more ‘in key’. 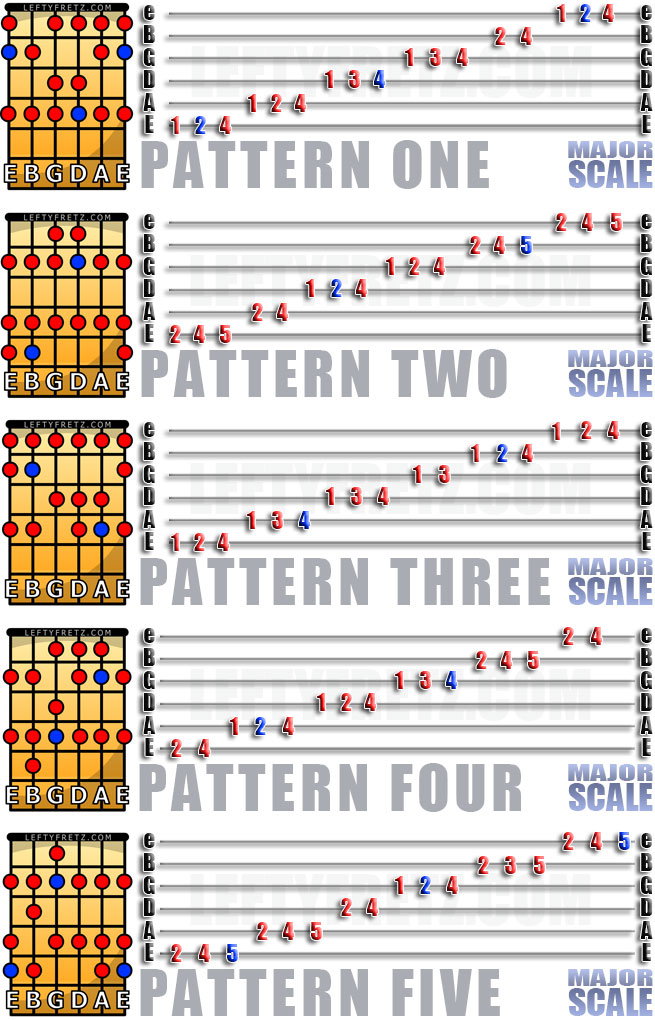 All of the different patterns are interconnected and note overlaps will occur between adjacent shapes – for example patterns one and two share eight of the same note positions.  Take a look at the diagram below to see exactly how each pattern connects and overlaps with the next.  If you have swatted up on your note name positions then you’ll be able to work out that this particular diagram shows the A Major Scale (all of the blue notes are A’s).  If you haven’t yet mastered learning the names of all of the notes, check out our lesson on Learning the Guitar Fretboard Note Names.

Start off by learning the first pattern and then build upon that by adding position five behind it. Practice moving fluently between the two positions.  Once you have them mastered try adding the second pattern on top of position one and keep building up until you can cover the entire neck.  To make the learning process more interesting play the scale shapes over some of your favourite songs, or find a backing track from any online resource.  One of the easiest places to find a backing track in almost any style and/or key is YouTube.

To really embed these scale shapes in your subconscious try and play them in as many different ways as possible.  For example make sure that you can play them ascending as well as descending and even try and play the entire scale using only string!

Practice while watching your favorite television show and you’ll find that muscle memory soon takes over and you’ll be able to play these patterns in your sleep!

Hit the buttons below to share this lesson with your friends!