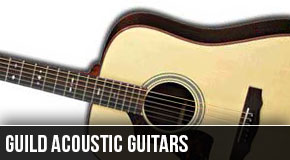 A brief look at the left handed guitars available from USA brand Guild Guitars. An unfortunately poor selection from this Fender owned company.

Part of being a musician is that desire to perform your creations in front of other people, hopefully in exchange for their love and adoration!  There are few better feelings than having an audience applaud and cheer for you – but is playing live really as simple as you thought?

Anyone can jump on a stage, plug in a guitar and belt out a few songs.  In your head you may imagine that you’re giving a great performance but you may discover that the audience disagrees greatly.  It’s not just all about playing the songs perfectly you know – audience interaction is key!  Here are a few simple tips to ensure that you leave the crowd stunned and screaming for more!

The only way a gig is going to be a triumph is if the crowd digs it, and you’re not likely to get them pumped if you’re just there to boost your own ego!  You need to remind yourself that you’re playing for them and not for yourself.  Ensure that you know your material like the back of your hand so that you can concentrate all of your attention onto the crowd.

Enslave a friend and ask them to video your next gig, and afterwards scan back through the footage and keep an eye out for any interaction with the audience.  Watch the video back as if you were a member of the audience and ask yourself if the band is really capturing your attention.  Keep an eye out for components of the performance that got the crowd going and then milk those ideas at the next gig!

I recently went to two excellent concerts – Jeff Beck and Joe Satriani.  They were both great gigs, but the difference between the two artists was very noticeable in terms of the personality that each player exuded.  Jeff was more subdued whereas Joe was smiling, jumping around, talking to the crowd and generally having an awesome time.  I personally enjoyed Joe’s performance more because I could see that he was having a good time.  So when you’re playing your next gig make sure that the crowd can see that you love what you’re doing by the way that you act on stage.  This will make it much easier for them to do the same!

Connect with the Crazies!

When you’re performing to an audience you will notice that every person watching you is totally unique.  Some people prefer just to stand and enjoy the music whereas others will love to lose control and dance and sing.  Scan the crowd for members of the audience who are clearly up for having a wild time and focus on playing up to them.  As I mentioned above, their enjoyment will make it easier for the rest of the crowd to let loose a little! 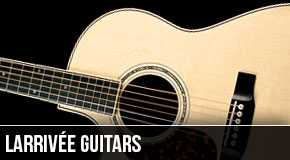 Larrivée is a family owned and operated Canadian guitar manufacturer that specialises in acoustic guitars.  I recently sent out an email to most of the bigger guitar brands asking about left handed guitars and the response I received from Larrivée was the one which impressed me the most – they really seem to go above and beyond the call of duty to ensure that lefty players are not excluded…

You see, Larrivée offer every single one of their guitars as a left handed option, and at no additional cost!  Here is the reply I received from Matt Larrivée to my question – “Why don’t guitar manufacturers produce their entire product line with a left handed option?”

“For us the issue is a non-issue because we offer everything we make in a left handed version, regardless of expense and without additional cost. We believe that anything else is in essence discrimination. For some models the cost is huge! And we’ll literally spend 2000-3000 dollars to make one $2000 instrument. With Larrivee, lefties usually just face a larger delay than their right handed counterparts. This is because right handed models are stocked, where as the lefties often have to be pulled from production to ensure a fresh un-aged guitar.

Acoustic non cutaways are extremely easy to make lefty, because no special tooling or minimal tooling is required. Cutaway lefties require about new tooling to be built for the cutaway. The tooling is usually in the form of CNC jigs, or medium density fiberboard jigs.

Electric lefties are far more challenging because we don’t manufacturer all the parts ourselves. We have limitations of other manufacturers. For example, potentiometer manufacturers do not manufacture long shaft lefty pots, so we have to custom make the pots. Also plastic injection mold companies don’t want to make lefty knobs, etc. We had to do A LOT of research and duplicate left handed versions of ALL of our jigs. It was a $30000 endeavour.

Mandolins are also extremely complex because of their 3d curves.” 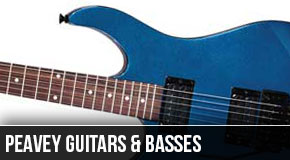 Peavey were one of the first musician brands that I was ever aware of – when I was but a boy all the big kids used to play Peavey amps, although I always thought they were called ‘Penkey’.  They have a great selection of musical equipment, but of course today we are here to check out their lefty bass and guitar models!

Unfortunately Peavey only have a very limited selection of left handed guitars and all of them are entry level models.  Beginner lefty bassists are well catered to with the Millennium BXP basses which are available in some really eye-catching finishes.  However, lefty guitarists are plum out of luck with only one guitar available, what a shame!

Let’s take a look at the rather limited selection…

Peavey’s new Millennium 5 BXP electric bass is a perfect balance of beauty and brawn. A real maple quilt top maple veneer provides stellar looks at a whole new price point. The 34 inch scale smooth satin finish neck is made of hard rock maple with rosewood fretboard. We’ve also included our string through body design for added sustain and power it up with two straight single coil humbuckers. The result is a beautiful bass with awesome sound and versatility. Try the Millennium® 5 BXP to feel the spectacular action and smooth, even tone.

Pickup covers – some people love ‘em, some people hate ‘em, but luckily you don’t need to live with them if you are one of the latter!  Removing the cover from your guitar’s pickup is a job so simple that even I could bungle my way through it.  Don’t believe me?  Alright, I’ll show you mister!

If you don’t have a problem with any of that then let’s have a go!  I’ll be using my cheapo Vintage V100 for this example.  I always found the tone of this guitar a little too mellow for my tastes, so I’m hoping the guitar will have a little more BALLZ by the time i’m finished! ;)

Get rid of your strings and remove the pickups.  If your pickup has enough wire length you can get away with just flipping it over and resting it on the guitar body.  Make sure and protect the finish by placing something between the pickup and the guitar – things are about to get messy!

Step 2 : Fire Up the Soldering Iron

In the photo below I’ve highlighted the two blobs of solder that are holding the cover in place.  In order to remove the cover we’re going to need to get rid of these – duh!  So, using the tip of your soldering iron heat up the solder until it softens and wipe it away with a thick cloth.  Be careful not to burn yourself – molten metal on your skin = bad times!

My guitar collection honestly seems to change every month, for the most part due to my obsession with scrutinizing eBay on a daily basis for rare lefty gems.  However, what doesn’t seem to fluctuate is the size of my collection…

Last week I watched a video on YouTube where John Mayer’s guitar tech showed us around his live setup and it just blew me away how much excess baggage there was.  The guy travels around to every gig with at least FORTY guitars and only plays 10-15 songs at each concert. I’ve always kept a very steamlined, minimalist setup and so it just baffles me why some people seem to feel the need to have such a large collection of instruments.


For the longest time I was a one electric, one acoustic guy and really didn’t see the sense in having anything more than that.  Mostly this was because I was trying to survive on my limited student budget and couldn’t justify anything over what was entirely necessary.  I was content with my simple setup where nothing was surplus to my needs.

Invariably I would end up stumbling across something I wanted to try on eBay, and seeing as I am an impulse buyer I would more often than not pull the trigger.  Every time something new entered the LeftyFretz collection the balance would be upset and one guitar would end up being played far more than the other.  I had to choose between having a rarely played guitar or facing another semester living off beans on toast – it always seemed a no-brainer to ditch what I didn’t need.  The balance would be restored and my two guitar setup remained the mainstay for my entire university career.

Now that I am in a position where I can afford to buy more guitars than I need my mindset still has not changed.  If I buy a guitar that does not get used every week it goes back on eBay where it will find a better home.  Waste not want not and all that jazz…

Last month I wrote an article describing why restringing a right handed guitar for a lefty was a bad idea.  I received a handful of amusing comments back from readers who recalled many of the troubles they had when they first started playing guitar and restrung their dad’s old right handed model upside down.  These comments got me thinking…

How hard could it be to design a guitar that could be played by both left and right handed players?  It’s probably the most rediculous idea I’ve ever had, but hey, wouldn’t it be fun to try and design something like that?!  Well I spent a lonely evening in Photoshop and came up with the ‘2-in-1’ .  Please don’t take this idea too seriously, it’s just a bit of fun…

This is a guitar that through some very minor adjustments could be set up for either left handed or right handed players.  It would be aimed purely at beginner players and would be the only left handed guitar in the world that any store would be happy to stock more than one of.  The guitar would be mass produced and would be priced at the lower end of the market to make it appealable to new players who don’t neccessarily want to spend too much on a new hobby.

Imagine walking into a music store as a new lefty player and asking the salesman what left handed guitars he has in stock. “Oh, well I’ve got a couple of Strat copies in black, a Les Paul copy in black, and I think there’s a Tele copy somewhere, it’s black “.  Your heart sinks.  “But wait, I’ve also got these 2-in-1 models, if you give me 5 minutes I can switch them to being left handed and you can have one in any of these 10 colors I have in today “.  Woot! 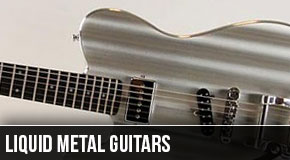 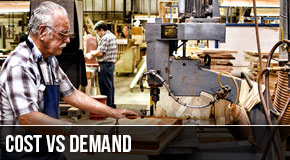 I asked some big name guitar companies why they don’t make more left handed guitars. Here are their replies…