Is it just me, or is it safe to say that the majority of southpaws are sick to death of being force fed budget, gloss black guitars? Every time I post a new article which features the token range of black left handed guitars, 50% of the comments are along the lines of “oh great, just what we need, another black guitar!“.

This opinion is seemingly unique to us left handed guitarists. While right handed players can more often than not pick and choose from a variety of finishes, we lefties are quite often presented with black as the only option.  Walk into any small music store and more than likely you will only have a couple of black Strats and perhaps a few budget black Ibanez models to select from – who wouldn’t get frustrated by this?

Thai food might be your cuisine of choice, but eat it every night and you will eventually grow tired of it, right?  Well this is exactly how I feel about black guitars – they are force fed to us by so many big companies that I am now completely underwhelmed by them.  For the first five years of my guitar playing career I almost exclusively owned gloss black guitars because of a lack of other options, and as a result I wouldn’t touch one with a bargepole now.  It may be a safe and inexpensive choice for these brands to make, but good god it’s also a boring one.

Tonight I was browsing my Twitter feed and noticed that Sterling by Music Man had announced their new 2015 range. At present there is only one lefty electric, as well as a bass or two.  Here’s an image which shows the colors that the JP60 is available in. 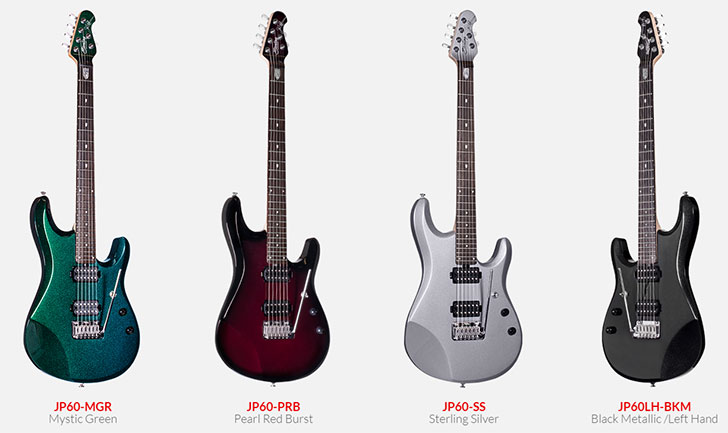 You’ve gotta laugh… Not only is it only available left handed in black – RIGHT HANDED PLAYERS CAN’T EVEN GET THE DAMN THING IN BLACK.  It’s exclusive to us.

A Reflection On You

As far as I’m concerned your guitar should reflect you, it should be an extension of your personality. Black is dull and gloomy. Are you dull and gloomy?

Don’t get me wrong, I think black guitars can look fantastic – they just need a little help to become less ‘plain Jane’.  It’s the dull as ditch-water, plain gloss black guitars that I despise wholeheartedly…and unfortunately this is more often than not the sole option available to the oft forgotten southpaw guitarist – at least until you are willing to shell out more serious money…

One goal of paramount importance when playing live is to be MEMORABLE. If you’re standing in the back in your dark clothes with a black guitar you’re not making much of a remarkable impression as far as appearances are concerned, are you? Hell, if the lighting at the venue is poor people might not remember you at all when the gig is over…

I also feel that it can skew the manufacturer’s perception of market interest.  If you bring out a black left handed guitar and it doesn’t sell well, you might assume that the demand just isn’t there and discontinue the model.  If that same guitar had been made in a color less despised by lefties it could have made all the difference and sold by the bucket load.  The point of view of the southpaw guitarist can differ greatly to that of a righty player – the brands who realise this are the brands who will have loyal left handed endorsers.

I had a couple of digs at Ibanez in this article.  Recently they brought out the new RG721RWL, a guitar with a beautiful rosewood top and matching headstock veneer. At work we have plenty gloss black Ibanez on the walls – these new models sold out before they even arrived in the stores!

Do you agree with me, or am I alone in my quest to inject some color and interest into my guitar playing career? Leave a comment below with your own opinions. Are you bright and colourful, or dark and mysterious?