One of the burdens associated with being a left handed guitar player is reduced choice when choosing your next instrument.  In general it’s not a huge issue as there are plenty of great options out there, but sometimes you can’t help but wish that certain dream model you lust after was available lefty!

Have you ever pondered why some companies make seemingly all of their guitars as a southpaw option whilst others are happy to make none at all?  Have you ever wondered how brands decide which guitars to make left handed?  Let’s see if we can find out… 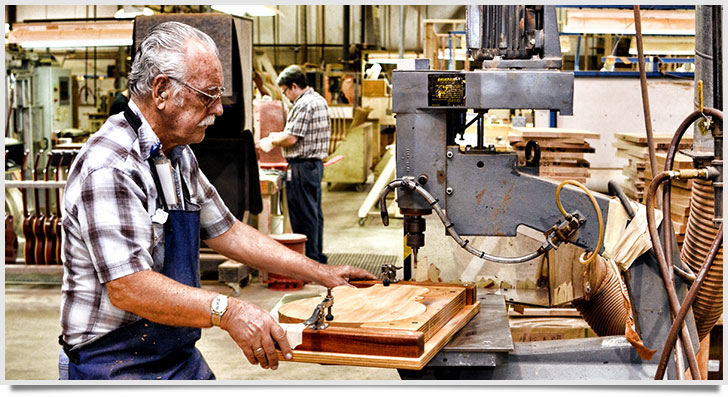 Last month I emailed around a few well known brands and asked them “Why don’t guitar manufacturers produce their entire product line with a left handed option?”. The obvious answer is cost and lack of demand but I was hoping they could elaborate a little more on this – and boy did they!

A big thanks to all of the companies who took the time to reply to my question.  The responses from each brand are listed below – those  who are missing either weren’t able to supply any detailed information or just flat out ignored me.  I’m guessing the companies who didn’t reply were perfectly aware of their discriminatory ways and didn’t want their name to appear in any articles on the topic.

First of all let may say how impressed I was at the level of customer service received from Anderson Guitarworks.  Not only were they the first to reply to my email (literally within minutes!), but it was Tom Anderson himself who took the time to answer.  Out of all of the replies I received his was probably one of the most useful in answering the big question.  Here’s what Tom had to say…

“ I can only speak as a small manufacturer and not all I say would apply to a larger company.

We offer most everything we do left handed at the same price as right handed even though in most cases the outsourced parts cost more because we buy them in smaller quantities. I always felt bad that lefties had to pay more for the same product, but i’m sure if I had to justify to bean counters we would not make them.

For all the in house made parts, which is most of the guitar, it really isn’t any harder to make right or left handed parts if the tooling is made to do both. There lies the rub. It is often hard to justify the time spent on a fixture or program you’re only going to occasionally use. If you were talking about high production you could be talking about much more expensive tooling that might be even harder to justify. Of our 800 or so guitars a year that we make, only 30 or so are left handed.

The other x factor about anything you don’t do often or make lots of is that it usually takes longer to do everything when you have to “relearn” every time you do it. So the labor of a left handed guitar is higher to go along with the potentially higher material costs. “

“ What you write is correct; the main reason why all models are not available left handed is simply the lack of demand.

When we create a model the research cost must be sprayed over the number of instrument sold. If the amount is small, then it makes it impossible to recover these costs.

Other problems are parts, for example, the bridge, have to be made specially and it cost a lot to make small series.

Another aspect to take into consideration is the manufacture tools. Even if today one part of the production is made with a CNC, a lot of tools must be specially designed per models, which increases the price, if you cannot spray the cost over normal sales it makes it impossible to produce.

Finally when we decide for a left hand model, it is usually because we think this model will fit most of the musician. “

“ Basically it is down to cost and demand. Manufacturers need volume in order to produce economically. All CNC machinery and tooling has to be set up completely differently when making LH models. The cost is higher on electrics and basses than acoustics as the bracing pattern and bridges just need to be reversed.

We choose the most popular models RH to make LH but usually restrict colour options due to small demand. Cort try to manufacture all LH models 3 times a year in order to produce the quantity.

Production costs are generally 10% to 15% more for LH models.

However, large manufacturers like Cort (we are actually the biggest with nearly 20% of world sales) do realise that LH players do offer a market area worth providing for and will offer LH models in pretty much everything as long as the Distributors in the various countries order in large enough quantities usually a minimum of 60 to 100 pieces. “

“ You’re absolutely correct, costs and demand are both of the reasons why we don’t make many left handed guitars. When we go to build our left handed guitars, the whole factory literally needs to be shut down and re-tooled. The machines that cut the bodies, necks, and pick guards all have to be reprogrammed to do so. Even some parts of those machines need to be changed.

Once they are built, they will go to our warehouse and if they are not sold right away, it costs us money to keep them on the shelf in the warehouse. In other words, it wouldn’t make financial sense to build “x” amount of guitars and have them sit on a shelf for “x” amount of time. We try to look at market demand and see what lefty players would use the most. “

“ For us the issue is a non-issue because we offer everything we make in a left handed version, regardless of expense and without additional cost. We believe that anything else is in essence discrimination. For some models the cost is huge! And we’ll literally spend 2000-3000 dollars to make one $2000 instrument. With Larrivee, lefties usually just face a larger delay than their right handed counterparts. This is because right handed models are stocked, where as the lefties often have to be pulled from production to ensure a fresh un-aged guitar.

Acoustic non cutaways are extremely easy to make lefty, because no special tooling or minimal tooling is required. Cutaway lefties require new tooling to be built for the cutaway. The tooling is usually in the form of CNC jigs, or medium density fiberboard jigs.

Electric lefties are far more challenging because we don’t manufacturer all the parts ourselves. We have limitations of other manufacturers. For example, potentiometer manufacturers do not manufacture long shaft lefty pots, so we have to custom make the pots. Also plastic injection mold companies don’t want to make lefty knobs, etc. We had to do A LOT of research and duplicate left handed versions of ALL of our jigs. It was a $30000 endeavour.

Mandolins we also extremely complex because of their 3d curves. “

“ The answer I’m sure you’ll be getting or have gotten already from most manufactures regarding the availability of lefty models is mostly down to the cost of production and the fact that there are more players out there righty than lefty, or at least willing to play a righty model. Lefty guitars require a different string setup between the nut and bridge. Also, as many acoustic guitars are a cutaway body in today’s markets, this means added costs of production to replicate these cuts ‘flip-flopped’ to the other side.

I’m not sure of the exact difference in costs since all of that is on our factory level, but as far as choosing which models are offered in leftys, it is based on the more popular and standard righty models. Many manufacturers that offer customized models are generally more adapted to produce any lefty model imaginable, but it is at the custom outfitted price. “

“ I cannot speak for other companies but Martin Guitar does offer our entire product line left handed at no additional cost.

On the neck we have to reverse side dots and slot the nut for left hand playing. “

Schecter couldn’t offer me much information because apparently customer service can’t forward an email to someone with the know-how!  Anywho, Schecter are so good to us lefty guitar players I had to at least show they replied!

“You are correct in guessing that cost of production versus demand is the number one reason.  Schecter is proud to offer more left-handed versions than many other companies, due to our commitment to providing more options for our customers despite the added cost. “

“All our guitar bodies are cut using computer controlled machinery. The computers must be re-programmed to cut left handed models. On acoustic guitars, all the internal braces have to be reversed. Electronic parts and smaller parts such as nuts and saddles must also be reversed.

We only offer basic models in LH versions as basic models are usually our best sellers. That’s why we don’t offer any high-end LH models.

For us to produce our entire line in LH versions, we’d have to increase the price tag of all our models (including non LH models) to cover for the expenses. It’s not something we wish to do at this time.

Another concern is that our factories are currently at 100% production, so producing more LH guitars would slow down the production of other models. “

So there you have it guys.

What can we take from this?  It certainly seems that being a lefty acoustic player isn’t nearly as big of an issue as being an electric guitar player.  Most of the predominantly acoustic companies who replied do seem to offer the majority of their line as a left handed option.  I know for a fact that Taylor shares the same business model but unfortunately I couldn’t find an email address to contact.

Electric guitars are a lot more restricted due to their more complex hardware and designs.  According to Fender, the entire factory has to be shut down in order to re-tool for left handed models!  You just can’t argue with cold hard facts – the demand is much less and the cost is high.  Until newer, more efficient production methods can be introduced we’ll just have to make do with what we’re given!  Ah well, certainly saves on G.A.S right? ;)